Dipladenia is also known as Mandevilla, after the British diplomat and grower Henry Mandeville who discovered the plant in the early 1800s. The genus Dipladenia comprises 114 species. We breed the species Dipladenia sanderi, which comes from Brazil and has been known as a house plant in Denmark since 1966. We sell it primarily to customers in Denmark, Sweden, Norway, Finland and Germany.

Dipladenia can be propagated by cuttings. Take the cutting just above a leaf node with as much stem under the node that it can be planted in a pot. Cover the pot with plastic until the cutting has formed roots. Depending on the size of the pot, it is advisable to plant at least two cuttings per pot. During propagation (until the cutting has formed roots) it is important to keep the plant moist. Once the new plant has an abundance of roots in the pot, do not over-water it.

Dipladenia is a splendid plant that can be left outdoors when the night temperature is over 10⁰ C. The Dipladenia will continue forming flowers until the first frost. It is not necessary to replant the pots during the summer. The plant is easy to care for. It thrives outdoors in full sunshine and must not be over-watered. If the plant is kept indoors, keep it away from south-facing windows on hot summer days. We cultivate red, rose and white Dipladenia and sell them both with and without a hoop. 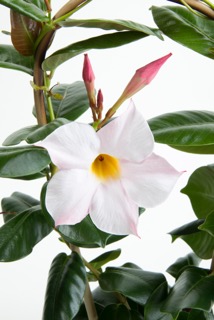 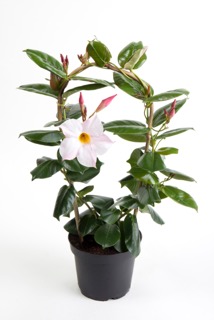 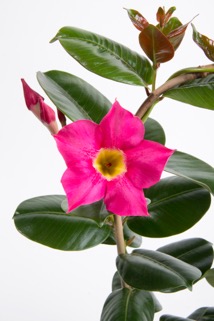 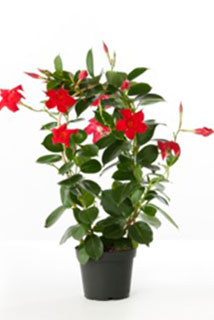